A History of Southey, written by the late H.D. Stovell to commemorate the Club’s centenary in 1986 states “Southey Bowling Club was founded in 1886 and its first green was besides the Freeman’s Arms Hotel in Merton Road (now known as Wimbledon Broadway). Another author A.R.G. Ashworth infers that habitués of the green at The WHITE HART in Kingston Road, Merton, moved to a new green at the Freeman’s Hotel. Another theory is that another bowling club formed at the White Hart earlier than 1886 moved to the Freeman’s Hotel and at that point adopted the name of Southey because of its proximity to the road of that name.

In 1948 a book entitled “All About Bowls” listed forty-fourclubsthat had been founded before 1893, ten of these were in Surrey, one being Southey. The earliest was Farnham Bush (founded 1630 and now extinct).

“To the oldest men’s club in the Wimbledon area, Southey, then playing on a green at the The Freeman Hotel, in the Broadway belongs the credit of having commenced the competitive spirit among women as bowls players by holding an annual tournament for the wives of cub members. That happened in 1908. Prizes were costly and numerous, for the local tradesmen as well as clubmen gave liberally, and “Lady’s Day” at the Southey green became a red-letter day as well as an event for rolling out the red carpet, for hoisting gay flags and bunting and for the presence of a chorus of throaty tenors and lusty baritones who sang their bravest to the accompaniment of a little boypianist (H J Cuckney Junr).

In the early 1920’s the club moved to a green at the southern end of Southey road. This was behind The Duke of Edinburgh at the corner of Southey Road and Kingston Road. The club had the use of a room in the pub to hold meetings.

In 1940 a bomb damaged the pub, but the club continued to run. A flying bomb destroyed the pub in 1944. After this the club still had the green but no meeting place except a patched-up billiards room with no washing or toilet facilities.

In 1950 Surrey County Council announced a compulsory purchase order on the site.

1914 interrupted an upsurge in extensive house building in the area. These were resurrected in 1918. An area remained west of Lower Downs Road. This was a small triangle of land owned by Thompsons, William and Henry, market gardeners. They sold this piece of land to Fred HJ Skeens a builder from Earlsfield. By the end of 1926 he had erected terraced houses in Lower Downs Road (east side), Kingston Road (south side) and a new road, Abbotts Road(north side). These enclosed an open space roughly triangular about one and a quarter acre in extent. On this space Fred Skeens built a sports club consisting of two hard tennis courts, a bowling green, and a clubhouse. Access was from a driveway from Lower Downs Road at the club’s eastern end,and by a footpath connecting Kingston Road and Abbotts Road. 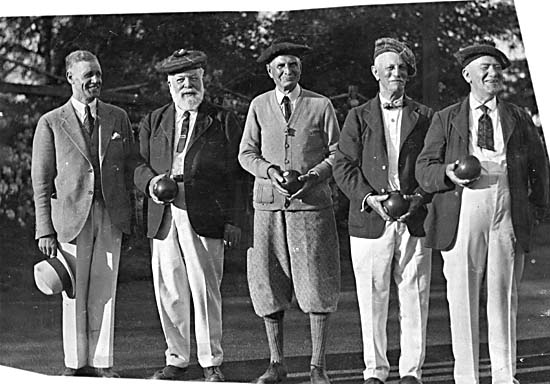 On 7th February 1928 Fred Skeens conveyed a lease on the property to the Kingsdown Club (Wimbledon). One of the restrictions prohibited the land for use other use than tennis, bowling and a sports club. The club affiliated to Surrey on 5th December 1927. The club continued until 1939 when the younger members were called away for military service and the facilities deteriorated. By the end of the war the facilities had become very bad. The tennis courts surface had been destroyed by weeds and the netting rusted away. The bowling green surface had an uneven surface with coarse grass and weeds. Many members left, and it became apparent the club could not continue.

Southey Bowls Club had the prospect of losing their green by compulsory purchase order and Kingsdown Sports Club, by the prospect of bankruptcy. Charles Cox, a prominent member of Southey, had a friend in Albert Farr, captain of Kingsdown, and often played there. It can be assumed that these two men had a prominent part in negotiations that followed.

During the summer of 1950 Southey set up a feasibility committee to investigate the takeover of the assets and liabilities of Kingsdown. On 18th October 1950 an extraordinary general meeting was held followed by the annual general meeting on22nd November 1950 and twice adjourned to 6th and 9th December 1950. At these meetings the feasibility committee reported that they considered a takeover a viable proposition. After considerable discussion the members decided that the club should proceed with the takeover. A lease on the property was negotiated with Fred Skeens for a period of twenty-one years at an annual rent of £90 payable quarterly. Regrettably some members had doubts and transferred their membership to Malden Bowling Club. This left Southey with 60 full members and 6 country members. Kingsdown Club now ceased to exist, and many members transferred their loyalty to the new club.

The club colours were “Royal Blue and Silver”. The original tie was royal blue with a narrow silver stripe. The blazer badge was a shield outlined in silver with the letters S.B.C. entwined. When we moved to 559, Kingston Road in 1950 and took in the Kingsdown members the badge was redesigned.

The Cross. Taken from the Shield of Thomas Osborne, Lord Darby, Duke of Leeds, who was Lord of the Manor of Wimbledon from 1676 to 1712. His arms were shown in the East window of St. Mary’s Church, but unfortunately destroyed by enemy action in 1940.

The Lion of Surrey.

The lion has featured in the coat of arms of many Dukes and Earls of Surrey from the year 1347.

Book and Quill.
Our tribute to Southey the writer from whom we took our name. “Southey Road” being the nearest street to our original home.

Hand Clasp of Friendship.
Not the perfunctory handshake of a conventional greeting, but the warm handclasp of friendship which says, “welcome to the 22nd end” and all that it implies.

Although the lease on the property was negotiated in early 1951 it was decided to dig up the green and re-lay it. It took more than two years to complete at a cost £1300 play continued the old green.

Although the lease had many years to run the club entered negotiations to purchase the freehold. Initially the landlord wanted £3500. Unfortunately,enough funds could not be obtained from the bank. After the landlord increased his price further negotiations resulted in a price reduction and the offer of a mortgage from the owner. This was agreed at a general meeting on 1st September 1960 following a plea for loans from the club members for the deposit. On the 7th February 1961 the committee was able to announce that the club owned the land. In July 1967 the final payment on the mortgage was made. In September 1963 all loans to members were repaid. In July 1967 a final payment for the mortgage was repaid four years before its due date.

The original owner had formulated an idea for an indoor bowling green in 1937. The ideas hadto be curtailed due to the Second World War but were resurrected in some form following. Southey considered the idea in various forms and in 1962 the idea was reopened. Discussions were progressed until 1965 when a proposal for a Merton IBC was proposed. This was rejected by Merton Council and so outside clubs were canvassed as to support. In 1967 plans were linked with a necessary clubhouse extension. These finally crystallised into just an extension as grant aids were refused for the green but approved for the extension.

In the early 70’s the ladies won their case for a separate section.

In 1976 the suggestion for an all-weather green was again mooted. In March 1977 the work commenced.Weeds were growing through in the ditches in 1978. By the end of 1979 the artificial green had become a white elephant.Finally, after considerations for an inflatable roof (indoor bowling green) and complaint from residents about the noise of players. Many discussions were held over months and years and finally in July 1989 concrete ramps were laid at each end thus converting its use into a car park.

In the early 1980 many discussions were held regarding a new bar. A burglary prompted a rethink as to security and the bar was deferred. However, in March 1983 work was started on a new bar after a change in brewer.

August 1983 saw the first mention of a Centenary Year.

A varied selection of matches was arranged. Other souvenir items were produced.

In 1980 50 conifers were planted along one side of the green as a memorial to A. Pelling. A further 40 trees were purchased and planted two months later. An automatic watering system was mooted. The green surrounds were improved in 1985. The condition of the green as giving concern and after intervention of the Surrey Green Ranger a RotorRake and a Hydrator were purchased. At the end of 1987 a deposit was paid on an automatic watering system.

In October 1987 the green was vandalised. Deep holes were dug on the green and plant pots and seats thrown on. The storm of that month damaged the dressing room roofs.

Animal damage appeared in 1988 and a fence was agreed. On consultation with other clubs an electric fence was considered cost effective and installed.

In 2004 ideas were forming for the future of the club. After 15 years of planning permission applications, denials, appeals etc permission was granted in July 2017 for redevelopment. Plans were in place for a new two-storey clubhouse adjacent to the green, new changing rooms and a fresh car park. The old clubhouse was to be demolished and the land used, together with an area of the old car park to build a development of nine houses (now called Bowling Green Mews)